The SAMD10 is a Cortex M0 ARM chip that comes in an SOIC format. This makes it easier to solder and particularly attractive for small applications, since they are cheap (<$1!). The WS2812b, or the Neopixel, is an RGB LED that uses one data line to display 255 x 255 x 255 different colours/intensities. In this project, I managed to get the protocol to work on the SAMD10 chip.

It is a protocol to light a string of Neopixel RGB LEDs in C.

It has not been done before for the SAMD10. I implemented the protocol following some inspiration from others using first principles. The protocol has very strict timing requirements, so getting it to work on a tiny chip felt like an achievement. Plus, RGB blinkie animations!

Getting started with this chip was easy. Using the SAMD10 Xplained board and Atmel Studio, I was able to get the usual gamut of communication protocols, LED togging and button mashing up and running.

One challenge I set for myself is to get the Neopixel, or the WS2812b LED to work with the SAMD10 chip. As far as I know, there have not been any libraries avaliable in Atmel Studio to get it to work. The WS2812b LED chip utilises a strict timing protocol to create a series of one-wire individually addressable RGB LEDs. 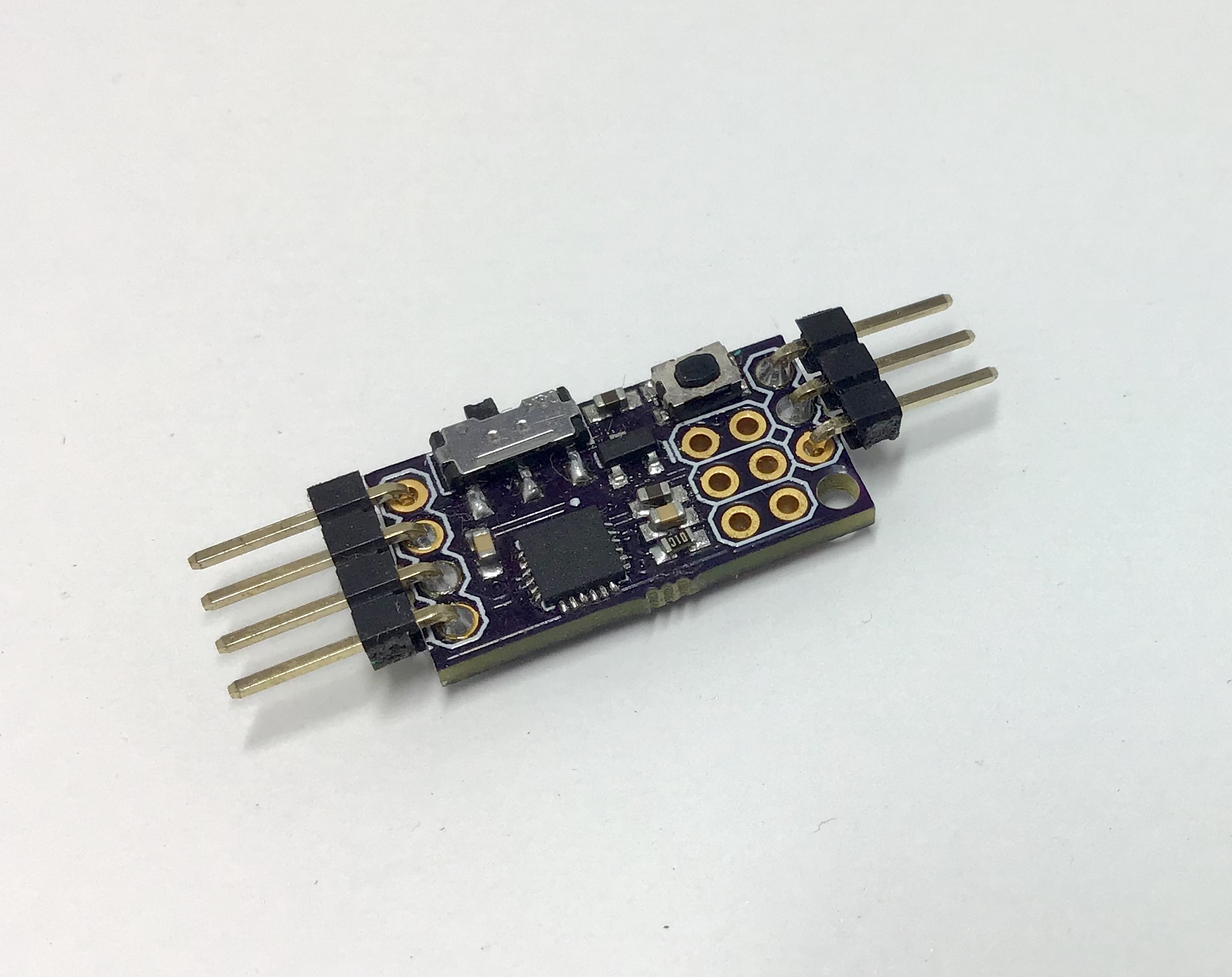 There are a few ways you can go around doing this:

After messing around with all three methods, I figured that using SPI was the most viable of the lot.

I used the Microchip SPI reference to get started on my project.

In order to use SPI to control the W2812b LEDs, the system clock must be set to 48MHz. This can be configured in conf_clocks.h.

Here we drive the Digital Frequency Locked Loop with the internal 32.768kHz oscillator to get the main clock speed of 48MHz. Now that we have a high speed main clock, we can comfortably divide the main clock to get a baud rate of 2.5MHz.

Here I will refer to a pulse as a state change from high to low or low to high, and a signal as a sequence of pulses that the WS2812b protocol recognises as 0 or 1.

Since each pulse is 400ns as we have defined as our baudrate for our SPI module, we need 3 pulses to indicate either 1 or 0 signals to the strip. 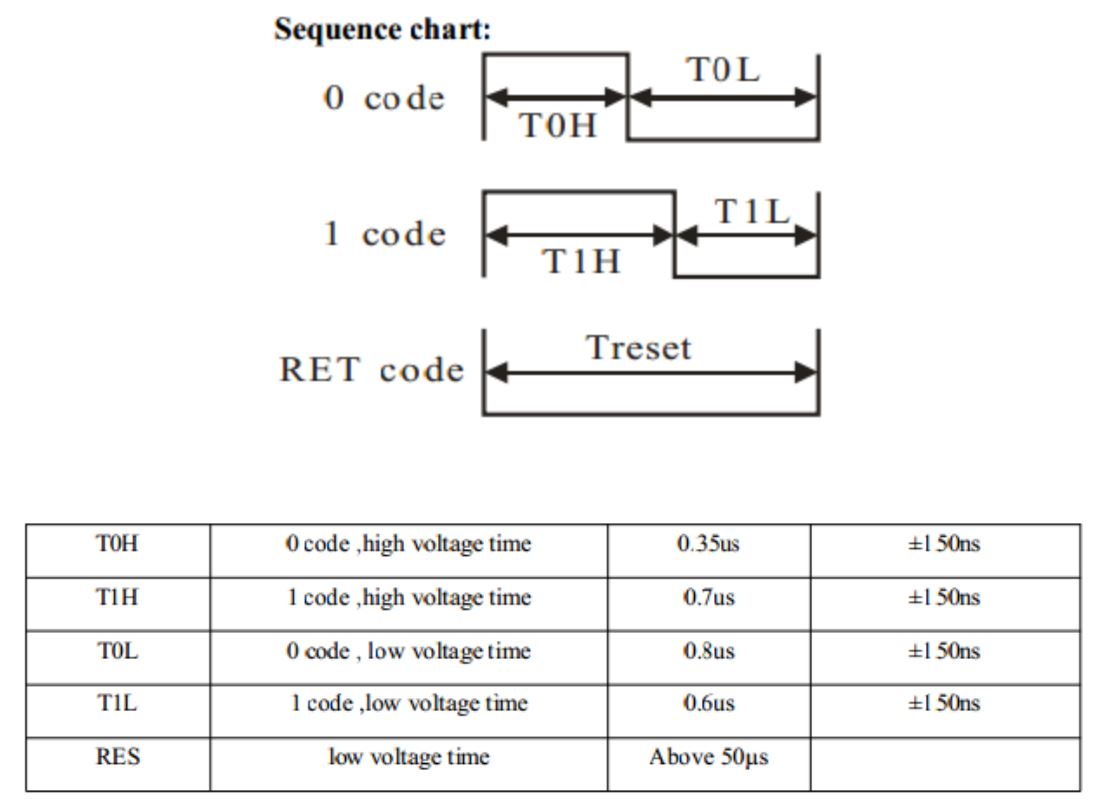 Each 'bit' or signal, requires three pulses, and since there are eight bits per color, we need to send 24 pulses per color. Toggling this in software is not very fun, so a table is generated:

We break the eight bit signal up into four bits. However that still leaves us with 12 pulses that we need to send. These twelve pulses are broken up into two segments, one four pulse segment and a eight pulse segment. We can write functions to handle this for us:

Now we can write a wrapper function that sends an RGB value using the sendByte() function that we wrote. However, since the datasheet specifies that a minimum of 50us is needed before the chip starts to accept the incoming signal or to terminate it, we write a few empty bytes before and after to let the chip know that we are finished sending because our MOSI line idles high and we need it to be low to start.

That's it! Although you will have to use a SERCOM module to run the LED, there are still two left. The nice thing about this bitbanging technique is that it can be done on the fly without much memory, unlike Adafruit's library, where the entire sequence of bits is stored in memory before being sent out in one stream. Each time you send an RGB signal the data will be shifted into the next LED and it will light up.

It took me awhile to figure out how to set the correct clock rate for the SPI, and that the function spi_write() was only writing 8 bits instead of the full signal, so I had to split it up into two writes for the 12bit data from the table. Another problem that I faced was that the MOSI line was high once the transaction was complete. This complicated matters because the chip expects a low idle signal, but I fixed this by sending to extra bytes before my data to signal that a transaction is beginning and then a few extra bytes after to signal that the transaction is completed.

MOSI cannot idle low, only the clock pin can, I found out as I was trying to determine if changing the SPI mode would make any difference.

Why not use an Arduino?

I wanted to use a chip with a small form factor (QFN24) because I wanted to integrate it in-line with the strip itself. Plus this was a good opportunity for me to improve my familiarity with ATMEL SAMD10 ICs.

Wrapping it in Arduino

Furthermore, I have also updated the code with some wrapper functions that allow usage of Arduino library code. This allows the use of animation libraries that people have already written for the Neopixel. One particularly good example is LED Strip Effects. One advantage of this is that the ability to generate an 'image' for the entire strip before updating it. Previously, the code to animate the strip had to be generated serially on the fly. However, we have to store it in an array, so the code size scales with the number of LEDs that are being used, therefore, depending on your needs, you might or might not want to use this particular addition.

I attached an LED strip to my bag and the board runs the Neopixels when power is supplied to it. This is good when I'm cycling or walking at night because it gets really dark. One improvement is to perhaps extend the strips to the side of the bag, so people approaching me from the side can see me as well.