The ESP8266 module is a low-cost wifi chip that was released by Espressif Systems and came to the attention of hobbyists in 2014 when AI-Thinker released the ESP-01 module. Since then there has been a proliferation of chips and breakout boards released to the public. There are many guides out there comparing the various ESP 8266 boards so I shan't do that here. Instead, I will focus on my favorite board, the WeMos Mini. 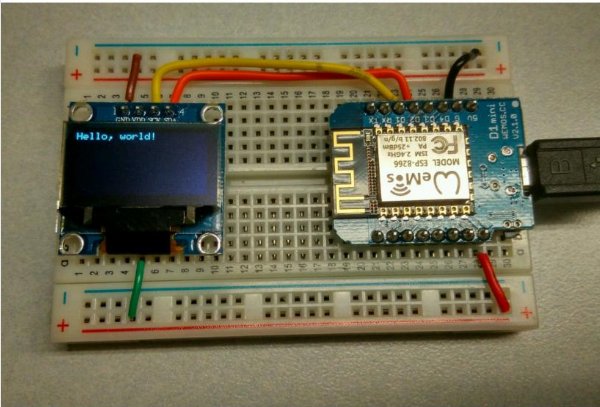 What the WeMos Mini is

The WeMos Mini breaks out all the pins on the ESP8266 module in a single, tiny, breadboard-friendly package. It has both 5V and 3.3V outputs which means that you can run modules that require 5V to operate and 3.3V logic chips. It also includes a handy little reset switch on the side for those times where your code borks. Another nice feature is that it is programmed by a USB-mini cable. No more looking around for that single USB-B cable you keep around for printers and the Arduino. It also slims down the package further.

Pictured here is my WeMos Mini on a half-sized breadboard with a NeoPixel Ring from Adafruit Industries. Note how small it is. I can pack this breadboard into a small box and slip it into my bag. Whenever I feel like working on my project I can just pull it out and start programming.

This neat little package costs all of $4 on AliExpress. It might drop further given the release of the ESP-32, another chip from Expressif Systems but with a larger memory, more pins, and bluetooth all in the same form factor.

What I really like about this module is that it is really your lowest cost introduction to microcontroller programming. Plus it also connects to the internet via wifi without any additional boards. For comparison, the Arduino Yun currently costs 70 Euros, which is absurd if you want to design Internet of Things (IOT) projects, note the plural. Even the Arduino Uno itself costs approximately $30. If I wanted to teach a group about microcontroller programming, I would introduce them to the WeMos mini.

I could even hand out the WeMos mini after the event because it is just that cheap.

What the WeMos Mini is not

However if you are interested in more complex projects, for example building a robot or something that has many inputs, then the WeMos mini might not be the best solution. It has a limited number of pins, and only one analog sensor. You'd be hard pressed to use two analog temperature sensors or drive a motor without a shield.

While the WeMos Mini has very useful shields, those are the only shields that you have, unless you can convert it to an UNO form-factor, and even then you'd be limited by the number of pins. There is a hardware limitation to how much a single chip can do, which is unfortunately its biggest strength and weakness.